In a note to letter 212 in The Letters of J. R. R. Tolkien, the master of fantasy writes:

In narrative, as soon as the matter becomes ‘storial’ and not mythical, being in fact human literature, the centre of interest must shift to Men (and their relations with Elves or other creatures). We cannot write stories about Elves, whom we do not know inwardly; and if we try we simply turn Elves into men. (p. 285, second note)

This footnote caught my eye. Preliminaries are: Hobbits are men. Tolkien says as much in his letters, that Hobbits are part of the world of Men, not of Elves or of Dwarves. They a particular culture and breed of person who is, inwardly, human. This is important because the success of The Hobbit and The Lord of the Rings lies in their being told from a Hobbit’s-eye view. You start small, local, parochial, and expand into a much bigger, broader, badder world, hopefully changing for the better along the way.

Second preliminary is that here we see that Tolkien is well aware of the psychological aspect of the novel. In his famous essay ‘On Fairy Stories’, Prof. Tolkien is keen to point out that the main point of a story — fairy story, short story, novel — is not the exploration of the human psyche but the telling of a story; this is made as a genre distinction agains the more psychological mode of storytelling found on the stage, as well as the at times purely psychological world of poetry. Of course, the stage used to be filled with naught but poetry. (Something T. S. Eliot tried restoring with Murder in the Cathedral.)

Preliminaries aside, as a reader of fantasy and science fiction and occasional dabbler into world building (or ‘sub-creation’ in Tolkien’s terms), this is an important point that could be forgotten. When you read Tolkien’s descriptions of who Elves are, what their function in the Creator’s world is, what their nature/substance is, what little is utterable about their culture and society, it is clear that they are not human beings. They are Elvish beings.

This means that, besides immortality and a longing for a world where time stands still, alongside a capacity for sub-creative art and linguistic generation, Elves are psychologically distinct from humans. Their ways are not our ways. Their thoughts are not our thoughts. Their reasoning may be different from ours. Certainly their emotions are. Their longevity also means that they have an entirely different approach to memory, I have no doubt.

Tolkien is aware of the world he has made, as well as the limitations of the authorial act.

When I think on the Dragonlance novel Dragons of Autumn Twilight that I read aeons ago, it strikes me that the half-elven character was little more than a man with pointed ears and elf-skills. That is — his psychology was entirely human. This is no fault of the authors. I have a feeling it would take extraordinary dexterity that few, if any, authors have to be able to render an entirely alien psychology.

And if one were to succeed, I think the story would become much less accessible to the reader.

Here we see, yet again, the wisdom and care of Tolkien not just in creating his world but in writing his novels. Anyway, I would like to write essays — say, an exploration of consolatio in Cicero’s letters and in Christian letters, just teasing out themes and interesting things, not necessarily saying something new or driving home a very narrow, very specific fact. Or perhaps a wide-ranging exploration of western Christology after Chalcedon but, again, an essay rooted in exploring ideas and culture and writing prose. Not proving anything. Or even a conceptual-philosophical monstrum such as an extended study in Dionysian liberation theology. Not saying anything new. Just saying things.

Tom said that there used to be journals for such essays, but now everyone wants the groundbreaking articles with ‘impact’, trying to up themselves in the European journal rankings. Essays, the familiar essay, are just not on the table.

One could, he supposed, use a blog to that end.

And I sort of do, but not often.

However, he went on to say, the problem with blogs is — what will happen to them? Where will blogging content go? Will people be able to find a blogged essay five, ten, fifteen years from now? Furthermore, there is no peer review process. So the essay might be a nice piece of writing based on rubbish facts. Who can judge? (Well, on this blog, RWB serves as my peer reviewer!) Finally, who reads blogs? I have two blogs — one has a bit of reach, but this one (that which bears my name) has a much smaller draw. Perhaps 10-20 at best. My wife. My mother. A brother or sister. A few friends.

And what happens to this blog in a month, two months, a year?

Words, you see, are fragile.

We seem to think that digital publishing is an adequate replacement for print.

As I say, I have two blogs. I have had four. And before that, I had a Tripod page where I uploaded stuff I wrote. And before that Geocities. One of my blogs I think still exists, hosted on my sister’s server in Saskatchewan, but it seemed like every time I posted a blog I crashed the server, so I migrated here.

Where is all of the digital material from the 1990s?

That is the question that was posed to me when I postulated editing Leo’s letters through a peer-reviewed online source such as the Library of Digital Latin Texts. It’s true that much of our earlier issues of durability have theoretically been addressed, but how can we be truly sure until a decade or two has elapsed? By which time it is too late. Print is still the most durable.

After, of course, clay tablets — which come in second place after stone. I doubt Hammurabi was over-concerned with lasting into the next decade: 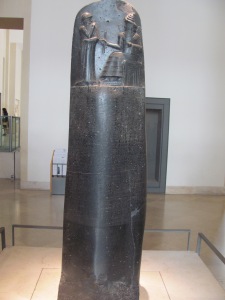 My pic of the Code of Hammurabi in the Louvre

However, most of us run the risk of living out Keats’ tombstone — one whose name was writ on water — not the durability of Hammurabi’s law code.

Anyway, what will happen to this blog? The other blog? All the blogs? Will they survive?

And can they really replace the familiar essay, as exemplified by Charles Lamb?