When I was a teenager, I bought a copy of The Essential Conan as a member of the Science Fiction and Fantasy book club. This anthology of classic Robert E. Howard Conan stories came complete with a poster of Conan wielding an axe, about to cut off the head of a serpent. Slinking in the background is an almost totally nude woman. Before putting the poster up, I honest-to-goodness cut out a paper dress to put over the mostly naked woman.

I was reminded of this poster recently, reading my Oxford World’s Classics edition of Ludovico Ariosto’s Italian Renaissance epic, Orlando Furioso. The cover depicts Ruggiero rescuing Angelica, mounted on a winged steed (bird? hippogriff? I don’t know yet), lancing a dragon from atop his mount. Angelica is nude:

This is, as I have alluded to above, standard Conan cover material: Naked (or mostly naked) woman being rescued from a monster by a hero with weapons. Ingres might paint fewer muscles, but all the essential elements are there for a cover of Savage Sword of Conan (for example).

This led me to start thinking about Howard and Ariosto. Now, I’m not saying that Robert E. Howard ever read Ariosto (or Boiardo’s Orlando innamorato). I do wonder if maybe he read Bulfinch’s Legends of Charlemagne, which is essentially a synopsis of Boiardo and Ariosto from what I can tell. Nonetheless, Ariosto and sword-and-sorcery fantasy are not as far as apart as you may guess.

There are men who fall in love with women so powerfully they will literally hunt them to the ends of the earth. There are men of nobility as well as villains amongst all races.

The cast of Orlando is essentially the same as in Conan, it’s just a different time period.

There are important differences between Howard and Ariosto, though. Howard is into what we would call the weird, etymologically speaking. The chilling, spooky, terrifying. There are dark and ancient evils hiding in the deserts of Howard’s imagination. Things without names. He also believes in the power of steel — it is not a magic sword that can save the day, but bravery and strong steel, even in the face of enchantment. His men are rough and violent, thieves, mercenaries, and the like. Conan is barely a hero, although he can rise to the heroic given the opportunity.

Ariosto’s world, a world of woods, castles, Saracens, and Christians, is different. The darkness is less heavy, and if enchantment is involved, you need enchantment to undo it. There is still nameless and faceless evil. But his men are cleaner and more civilised (if you will), living by a code of chivalry regardless of religion or ethnicity. They can also be straight-up wicked, despite their cleanliness and manners, mind you.

I’m sure that if I were reading Ariosto in Italian I would also find subtler differences than these. And if I read beyond Canto 4.

Most importantly for me right now, what they both have in common is that their stories are rip-roaring fun! 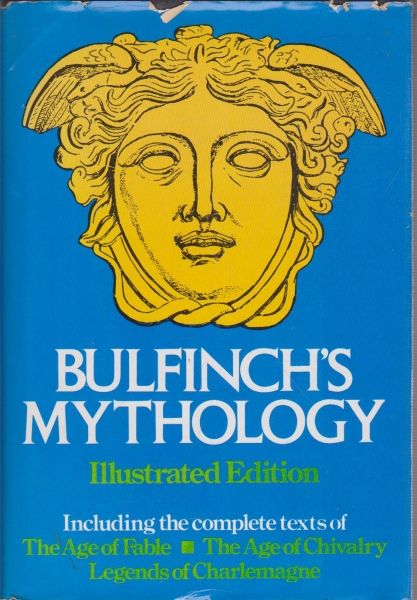 What’s a university for? What’s an education for?

So, really, why should … say … accountants study humanities?

Humanities — the liberal arts — you know, the foundations of knowledge and critical thinking that lie at the root of our civilisation and help give us the tools necessary to live wisely.

Again — why should an accountant study humanities?

This is a good question.

Certainly, the accountants I know are very glad for their mathematical training.

One of them also has a degree in geography. I don’t know if he’s glad for that degree, but I do know he’s glad for the wide knowledge he has acquired in his personal time while not studying for his certification to be a chartered accountant.

Here’s a fun fact for you:

Thomas Bulfinch was an accountant.

Thomas Bulfinch, if you’re unlucky enough never to have encountered him, was a mid-19th-century mythologist. Or mythographer? He realised that if people are going to understand and appreciate any English or American literature, they have to know Classical mythology and its referents. Whereas my approach to this is telling everyone to read The Iliad, Bulfinch wrote his own guide and retelling of Classical, Greek/Roman mythology, including selections from the poets themselves. He did this utilising his own knowledge of the Latin and Greek languages.

In his spare time, this accountant wrote his own retellings of Classical and mediaeval myths and legends, drawing from the sources in the original languages. Which, as a Harvard grad, he knew.

Here’s another fun fact for you:

Charles Lamb (Elia) was an accountant.

Yes, the writer of Essays of Elia, who collaborated with his sister to write the children’s retellings of stories from Shakespeare, was an accountant with the East India Company. Here was a man who wrote some stunningly beautiful prose, who produced finely crafted art.

Who sat on a stool at a desk as a clerk most of the day.

Both Bulfinch and Lamb were well-educated men. Both wrote remarkable prose. Both knew ancient languages. Both worked as accountants.

The nineteenth century knew that education was not simply a matter of skills acquisition for career development. Education is about grooming the mind and the person, training in thought and beauty and knowledge to live wisely and do what you love, whether that’s at work or at leisure, and do what you love very well.

We need to rethink education. I hope I can be involved in that as I enter the academic job market.