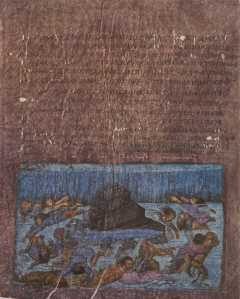 If you did Septuagint criticism, you could work on the Vienna Genesis! LOOK AT IT

A friend recently directed my attention towards the Tyndale House Greek New Testament. It’s not a bad idea, as far as editions go. They try to determine what the actual first-century spelling or pronunciation of the words at hand was and then use it, rather than a levelled-out, standardised, modern-Classical Greek spelling. This will please those of the ilk who like to see Cristus in medieval Latin instead of Christus. It is also, apparently, designed simply to be read, which is a fine idea as well. From what I’ve read on their blog, it seems that sound philology lies behind this edition of the Greek New Testament. It seems that Dirk Jongkind (whose work on the scribal habits of Sinaiticus I’ve actually read) and team should be pleased.

So you can go buy it and put in on the shelf next to your copy of the United Bible Societies’ Greek New Testament and the Nestle-Aland Greek New Testament, 28th edition, (both of which have about the same text) and Michael W. Holmes’ SBL Greek New Testament. (I guess, after making sure the world had a third edition of Lightfoot’s The Apostolic Fathers, Holmes felt there weren’t enough New Testaments?)

I shouldn’t be snarky. I should, as a (Latin) text critic be happy to see the science itself flourish and get publications.

Except, I wonder — is this evidence of textual criticism flourishing and getting publications?

Or do all of our promising Greek scholars with an interest in ancient Christianity find themselves beating to death the text and mss of the New Testament with no new major ms finds for years? I think the reason why NT textual criticism is innovative is twofold: 1. They have way too many mss and frags to deal with. 2. There are so many of them (scholars, that is).

Anyway, the point of this rambling rant is: Could you please divert your skills and resources and attention to something else? I, myself, am working on texts that haven’t been edited since 1753 (the letters of Leo the Great), for the most part, but also a couple that haven’t had any work done since 1723 (Coustant’s edition of the popes before Leo). This afternoon, I was looking at Durham Cathedral Library, B.IV.17, a twelfth-century copy of the Decretum of Burchard of Worms. Now, Burchard hasn’t been edited since 1748, but he’s at least had some very interesting textual criticism done since they found his autographs.

Those texts are Latin, I realise. But if the Greek Bible is of interest to young minds, brimming with linguistic knowledge, wouldn’t it be nice to see the Septuagint get some of the love? We have that German Bible Society edition, but that’s not fully and truly critical, and La Bible d’Alexandrie is not yet done, from what I can tell. This is the Bible Paul of Tarsus read, people; the Bible of Justin Martyr, of Clement of Alexandria, of Origen, of Athanasius, of John Chrysostom, of the Greek priest next door. From a purely academic standpoint, this is a hugely significant text in need of a lot of work. I know people are working on it, but they seem mostly to be French or German.

And what about the texts of the people who helped forge Christianity? The Apostolic Fathers aren’t the only ante-Nicene texts that could do with some sprucing up. And even if one stuck to the Apostolic Fathers, they only have three editions, not 28. Consider Clement of Alexandria, turn of the third century; Sources Chrétiennes lists the following if his texts as not even having someone to work on them: Canon Ecclesiasticus, Hypotyposeis, letters, De pascha, and several fragments. Anatolius of Laodicea (d. 280-90) has no one lined up for De decem primis numeribus. If you had the inclination, you could go through their list and see who else they haven’t finished. There are many. Moreover, just because someone has an edition in Sources Chrétiennes or in the Corpus Christianorum doesn’t mean it’s any good; I heard a rumour about a recent text of something by Origen (which I forget now) being worse than Patrologia Graeca.

And why should we, as scholars, invest in Patristic textual criticism rather than the New Testament? Not only because the New Testament has probably been overanalysed and done to death, but also because knowledge is good. Philology and philosophy and theology and history rest, to a large degree, on the texts we read them in. If those texts are bad, we are missing some of the nuance, some of the beauty, some of the philosophical accuracy, some of the historical detail. Besides that, all those New Testament manuscripts people like to read are contemporary with or later than the Greek Fathers who need work done on them. Codices Vaticanus and Sinaiticus are post-Constantinian. Claromontanus is sixth-century. P45 is from around 250 — so contemporary with Origen and later than Clement of Alexandria. These are the writings and beliefs and ideas of the people who copied out the texts that transmitted the New Testament. Getting to know them and their world should really be part of the same intellectual enterprise as getting to know the New Testament.

And if you’re good enough at Greek and wanting to branch out, maybe give some pre-Christian Hellenistic texts some love. They need it, too.

Or if your Latin is up to it, I know of a few popes who need some work. 😉