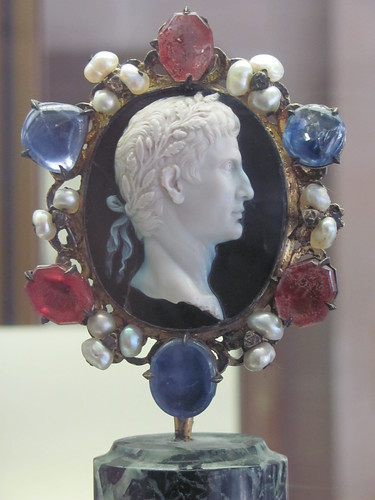 I posted as my Facebook status the other night that when Augustus (pictured left in a cameo at the Bibliotheque nationale de France that I happily viewed) died, I was a bit sad. It’s true. Suetonius takes you on this journey with Augustus wherein you see the many things he did, allegedly to better the Roman imperium, you learn about his character, all that stuff. And when he dies, with that line about them applauding him if he’d played his part well, and then his last words to Livia — it’s a sad scene. 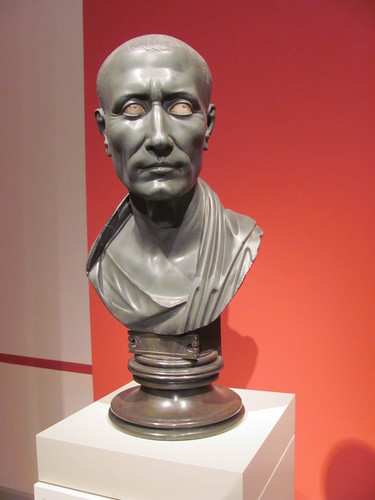 Julius Caesar (pictured right as viewed by me at the Altes Museum, Berlin), the first of the Twelve, on the other hand — that is the death you know is coming. This is probably one of the most famous assassinations in all history, if not the most famous. Certainly the most famous ancient assassination. So when the Ides of March come, you don’t need Shakespeare to tell you that bad stuff is going to go down. Suetonius has brought us to this point of inevitability, building it up with portents, omens, soothsayers, and Caesar’s own attitude towards it all. I felt no sorrow. Just the weight of necessity.

Tiberius (left, no photo of mine since that section of the Vatican Museums was closed the day I went!) — well, no one’s sad that Tiberius dies. His biography is interesting in that it starts off with him as a pretty decent senator and member of the imperial family. And then it descends into the dark caverns of Tiberius’ appetite for wine, boys, and song (if you will), his bloodthirstiness, his neglect of the Eternal City, and so forth. So when he dies, there is almost a sense of relief. Almost as though, ‘The city can be free!’

Of course, we all know Gaius’ nickname — Caligula — so we know it won’t be so. The same is true Suetonius’ original audience, I reckon. Who among the senatorial class of the 100s wouldn’t have had the names of the infamous emperors etched into his memory?

Nonetheless, equipped with this knowledge, Suetonius seduces you into his narrative, into his tales. Well, he seduced me, anyway. I felt what I was supposed to feel with all three deaths. He painted for me the portraits he wanted to, and my subconscious was drawn into those images.

Now, I know that the truth of all three of these men is not entirely Suetonius, both in terms of nuance as well as in omissions or additions to the historical record. I’m not a dummy; I know how to read a source better than that.

But Roman historians aren’t just sources — they are writers of literature. Indeed, history is included amongst the branches of literature, not philosophy, in the ancient handbooks. And so, to look at Suetonius as a writer, I find him seductive. His story and his vivid portraits draw me in.

*For work I’m reading Augustine, City of God, and a whole bunch of manuscripts, so the Early Empire = not work.

A vitally important fact that we all must come to terms with sooner or later is the reality of bias existing everywhere. For some reason, many of us have fooled ourselves into thinking that our news sources and our history books are somehow magically, spectacularly unbiased — that modern investigators of the truth can look clearly and objectively at facts and set them out for all to see.

Such a mindset leads to young people being surprised or scandalised or suspicious day after day when they start to engage with the primary sources that make up our knowledge of the pre-modern world. For, you see, pre-modern authors (ancient & mediaeval, plus many others pre-‘Enlightenment’) often wear their bias on their sleeve.

When we start to look at sources for early Christianity, for example, they kick up a fuss about the bias these authors had, that we cannot necessarily trust what Tertullian says about pagans or Eusebius on Montanists. That they are scandalously biased by their own religious beliefs. Eusebius, and ‘The Anonymous’ are so clearly anti-Montanist that we can trust almost nothing of what they say! But whom else can we trust, lacking any Montanist sources?

Or perhaps it’s Suetonius or Tacitus, who often corroborate each other on details. Despite this corroboration, it is clear at times that what these men say about the early emperors is biased by their own personal histories, their own class, their own writing careers under Trajan and Hadrian. People will go to great lengths proclaiming this bias, and say that we can, therefore, not trust these narrators.

It is true. We cannot trust them.

Sadly, we can trust no one. Everyone is biased.

We think we can trust Gibbon because of his modernist show of impartiality. But we cannot; contemporary research into Late Antiquity has shown him wrong on many points relating to the relationship between Church and Empire — his own anti-Christian bias slanted his perception of the evidence.

Or if you read contemporary reviews of Syme’s classic The Roman Revolution, today’s historians observe that some of Syme’s own contemporary socio-political world has leaked through (I’m going to be a bad blogger and not hunt down that reference).

Despite how hard we try, scholars are not free from bias. Acknowledging this is the first step to helping the reader find the truth that both parties seek.

To return to the ancients, we often assume that we can trust eyewitnesses. They may not be biased, but at least — unlike Tacitus and Suetonius or Eusebius vs. Montanists — they were there. They saw and heard with their own ears and eyes. How could we doubt, for example, Sennacherib’s account of his own reign? Or Eusebius’ account of a speech by Constantine that he witnessed for himself? Or Villehardouin’s description of the Constantinople-sacking Fourth Crusade?

It can be a cruel lesson to learn, that we are all biased.

Knowing bias, though, helps gives us insight into texts. What is Suetonius’ social background? What is his education? What is his occupation? What is his relationship to the current régime? If we ask questions about what forms an author’s bias, we can move into a deeper knowledge of the ancient world; we can form more informed opinions on the reliability of certain reports over others; more importantly, we can see what sorts of things people of Suetonius’ day and class believed true of the first 12 Caesars — perhaps even what contemporaries of those Caesars believed true.

This can bring us beyond simply trying to recount the ‘facts’ of politics and military campaigns or seeking to find the psychology of the emperors into discovering the worldview of the Romans who wrote and read these texts for themselves. A most valuable journey for all.