Capitoline She-Wolf. She was there to suckle Rome’s founder. (I saw her yesterday!)

Rome, according to tradition, was founded in 753 BC. Archaeology, I’m given to understand, thinks that’s not far off from the truth. This city has had continuous human habitation ever since, and for a very considerable portion of that time, Rome has been a major city. It was the largest city in the ancient world, with 1 000 000 inhabitants — not to be matched again until London in the 19th century. Although there was population decline in the last decades of Empire and much of the Middle Ages, the papal presence meant that Rome remained a major city, and is now a giant megalopolis as the capital of a modern, united Italy.

Rome, then, is a city of juxtapositions (people say this sort of thing all the time about European cities, I know). This fact first struck me on the bus ride in from Ciampino Airport along Via Appia Nuova. The speakers were blaring some sort of horrific modern popular music. Everyone was on a phone or whatnot. Modern buildings lined our course. And there — an aqueduct out the window. Sometimes other ruins. Sometimes 19th-century buildings with 20th-century shops languishing in the bottom floor.

The people who live in the region of Rome must get used to seeing antiquity at every turn. The novelty has yet to wear off on me — I have loved turning corners from modern streets to ancient monuments. Around a corner, and Marcus Aurelius’ Column! The Pantheon! Ooo, Republican era temples! Oh, down those steps is Trajan’s Column! Right next to all sorts of ancientness! Sweet deal. 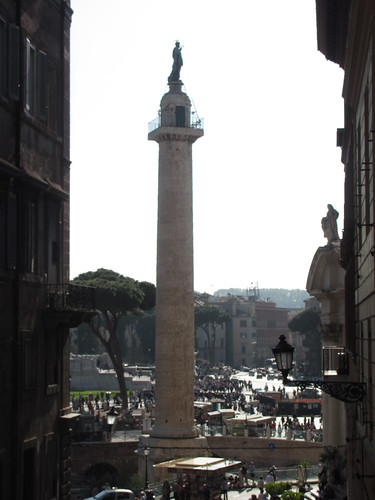 What sets Rome apart, as noted above, is that it’s not just ancient. Through this door — a Gothic church! Here, a Renaissance one. A Mannerist church. A Late Antique Church. A Renaissance palazzo. A Baroque piazza. A Baroque church. From the terrace at the Capitoline Museum, the domes of Rome’s churches pop up amid the roof tiles everywhere.

While Rome’s population may have declined at the close of antiquity, the Eternal City never diminished into a village clustered around some ruins the way Athens did. Athens feels like it has no life between Pericles and Byron. Rome’s ongoing life is everywhere, in the ancient monuments, mediaeval and Renaissance churches, Baroque fountains, and modern monsters (Il Vittoriano, anyone?).

It makes for an almost overwhelming city to visit. I like all of these things (Il Vittoriano gets old, and the Museum of the Ara Pacis is hideous). So much beauty, so much wonderfulness.

You start to feel small.

And you remember that your own place in this world is finite, temporal, gone in a blink of an eye.

So it is imperative to soak in a city like Rome while you can, before you are gone. Carpe urbem.