Although this title looks the sort of thing you’d expect from continuist Byzantinists, I’m actually arguing about Rome in what follows — that early mediaeval art in Rome is not Byzantine. 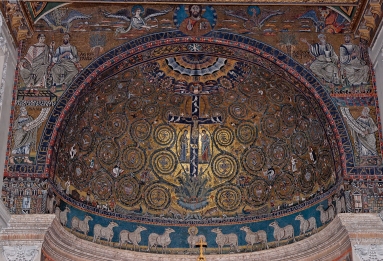 When I first visited San Clemente in 2014, there was a group of people looking at the magnificent apsidal mosaic. One of them remarked, ‘This is Byzantine’, in as natural a way as possible. I recommend you click on that image to the left to get a taste of San Clemente’s apsidal mosaic. It is a remarkable piece of craftsmanship, and I would never speak ill of it. People in the Middle Ages were great workers of beauty, and Roman mosaics are among those works of beauty.

But I was annoyed at the person saying that San Clemente’s mosaic was Byzantine. For one thing, it was built c. 1099-1125. I don’t think it’s very precise to call Roman art in the twelfth century ‘Byzantine’ — the papacy was already into its schism with the East, and the city was largely a papal city, although the Normans sacked it in 1084 due to papal-imperial politics, including the destruction of the fourth-century San Clemente, leading to the creation of the new one. The emperor in these politics was not in Constantinople but in the Holy Roman Empire. Crusading zeal aside, the outlook of Rome in this period was decidedly western.

Nonetheless, I can imagine someone saying that the current mosaic is a replacement of the fourth- (or ninth-?) century mosaic lost in the fire of 1084. And surely that mosaic would count as Byzantine. Therefore, this mosaic is an imitation Byzantine mosaic. 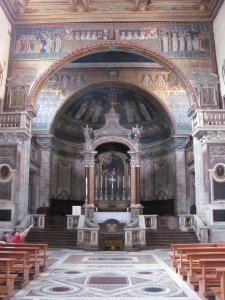 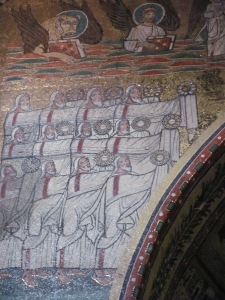 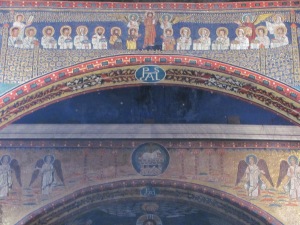 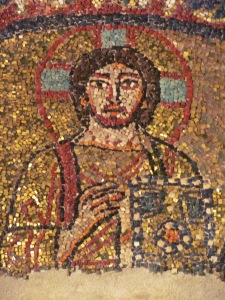 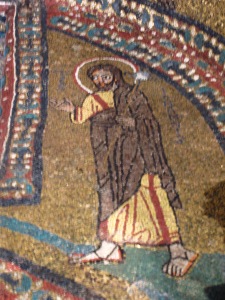 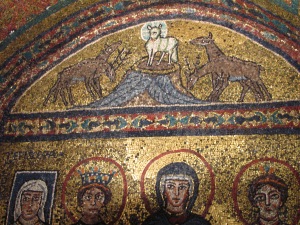 First of all, I can see immediately why we want to call early mediaeval Roman art Byzantine. Just look at it! And then, just look at Byzantine art, like the famous Christ Pantokrator from Ayia Sophia:

That one from 1261, of course, is much more naturalistic than these ninth-century mosaics. What people usually have in mind is more the sixth-century apsidal mosaic at St Catherine’s in Sinai:

Or the sixth-century mosaics at Ravenna: 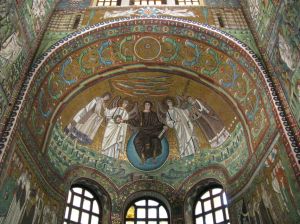 There is certainly a visual continuity running across these sixth-century mosaics from the edges of the ‘Byzantine’/Justinianic world into the Roman mosaics of the ninth century sponsored by Pope Paschal I. However, this same visual continuity also strikes the heart of sixth-century Rome, as Santi Cosma e Damiano, at the edge of the Roman Forum and built by Felix IV c. 524, as seen in my photos below:

Rome in 524 is living under the rule of Ostrogothic king Theoderic. They are only newly reunited ecclesially with Constantinople. Is it really accurate to say that this kind of art is ‘Byzantine’ in this case? Indeed, is it not visually united with the fifth-century mosaics of Santa Maria Maggiore?

Finally, why don’t we step back and see the visual continuity that runs from the Constantinian age and the Mausoleo di ‘Santa’ Costanza? (My photo)

This is Roman-style Late Antique and Early Mediaeval art, and it exists in mosaic and fresco, although mosaics are more durable. I have given examples from the fifth and sixth centuries as well as the ninth (see also the apsidal mosaics at Santa Cecilia in Trastevere, also commissioned by Paschal I), but I could have added the late sixth (San Lorenzo fuori le Mura, c. 580) and seventh as well (Sant’Agnese fuori le Mura and San Teodoro for mosaics and the remnants of the diaconia in the curia, now in Cripta Balbi, for frescoes). I do not know my eight-century Roman churches at all — apologies there.

Christian Roman art and architecture are habitually traditionalist. Their style remains Late Antique and persists with a certain degree of Classicism in architecture combined with a visual abstraction that we consider ‘Byzantine’ while northern Europe and Spain go through Romanesque and Gothic. This ‘Byzantine’ style of Roman art, indeed, continues well beyond definitively traceable Byzantine cultural influence in Rome, such as this 14th-century mosaic at Santa Maria sopra Minerva, Rome’s only Gothic church (my blurry photo; apologies):

Or what about the Dormition of the Virgin, a thirteenth-century mosaic in Santa Maria Maggiore? (My pic.)

None of this is to say that ‘Byzantine’ forces were never at work in Rome during the Middle Ages. Eastern Christian influences were certainly present in Rome after the Fall of the Western Roman Empire, such as through ongoing contacts with the Emperor in Constantinople, especially after Justinian’s Reconquest, and then through the arrival of eastern clerics. In the seventh century, many ‘Greek’ (that is, Greek-speaking) clerics came to Rome, such as the circle of St Maximus the Confessor. The Roman liturgy adapted some Greek/Eastern liturgical practices to her own use, and the papacy may even have taken on some Greek bureaucratic ideals. St Gregory the Great, in fact, even spent time in Constantinople before becoming Bishop of Rome! So, yes, there is cultural exchange. But it also goes both ways — Gregory the Great’s Pastoral Care is very popular in Eastern Christianity, for example.

All this to say — since words matter, we should be precise. Early mediaeval art in Rome is not Byzantine. It stands in its own strong Roman tradition, a tradition that persists in mosaics, at least, up to the High Middle Ages, and also has ties with its sister art in the Easter Mediterranean (‘Byzantine’ art).