A salutary trend in the BBC’s documentary programming is the production of intense, interesting, 3-part documentaries by the actual experts in the fields — such as Mary Beard’s excellent Meet the Romans and Thomas Asbridge’s The Crusades (no DVD, here’s the book). The first of these that I encountered was The Normans by Professor Robert Bartlett, Wardlaw Professor of Mediaeval History at St Andrews. When it was broadcast, I only caught the second episode, so I happily purchased the DVDs when they became available.

Most people really only know the Normans as the Frenchified Vikings who conquered England in 1066. Bartlett brings us into contact with them from France to the British Isles, from Italy to Sicily and the Holy Land — showing us not just their battles and politics but their art and piety as well. An expansionist power, the Normans were also great promoters of the arts, as Bartlett demonstrates — especially in the final episode.

The first episode of this documentary is called ‘Men from the North’. In this episode we learn of the origins of the Normans and their acquisition of Normandy in the tenth century. This episode takes us from Rollo to William ‘the Bastard’ (or Conqueror) in 1066. We see the ambitions of the early Normans, like Rollo, and their consolidation of power in the North of France, essentially independent of the French King.

We also meet Norman Romanesque architecture, elegantly displayed in buildings such as Mont St-Michel. A picture of architecture goes well beyond 1000 words attempting to describe it:

Episode two is ‘Conquest’ — 1066 and beyond. The details of the events leading to William’s conquest of the powerful and wealthy kingdom of England in 1066 are set forth for us, but the story doesn’t stop there (as it does in so many minds). The viewer is brought into contact with the Harrowing of the North, which subdued Saxon nobles who would not submit to William and ended with the Conqueror (or Bastard) feasting in the ruins of Yorkminster dressed in his full regalia, sent up from Westminster.

But conquest in the North did not end there. The Normans pressed westwards into Wales, and thence into Ireland. The local nobles resisted the Normans for centuries, but their eventual absorption into England’s domain demonstrates the forcefulness of the ambition and activity of the Norman kings and their successors, the Plantagenets (who are the subject of Bartlett’s next documentary series; also excellent — not on DVD yet). The Kingdom of the Scots did the best of Norman England’s neighbours — Malcolm III ‘Canmore’ (yes, from Shakespeare’s Scottish play) was clever enough to secure the fealty of Norman knights by making them into his own vassals instead of the Bastard’s successors.

The third episode, which I watched this morning, is ‘Normans of the South’. Here the story begins in the early 11th century with Norman mercenaries in Southern Italy. These men eventual become the major power of Apulia and Calabria, warring against the Byzantine Empire that still ruled in much of Greek Italy — and even against Leo IX, the first pope to take arms. From southern Italy, the Normans expanded to Muslim Sicily. The first King of Sicily, Roger II, made Palermo a centre of culture and exploited Sicily’s position as a crossroads of the three great Mediterranean cultures of Greek Christians, Latin Christians, and Arabic Muslims. His royal chapel looks like this: 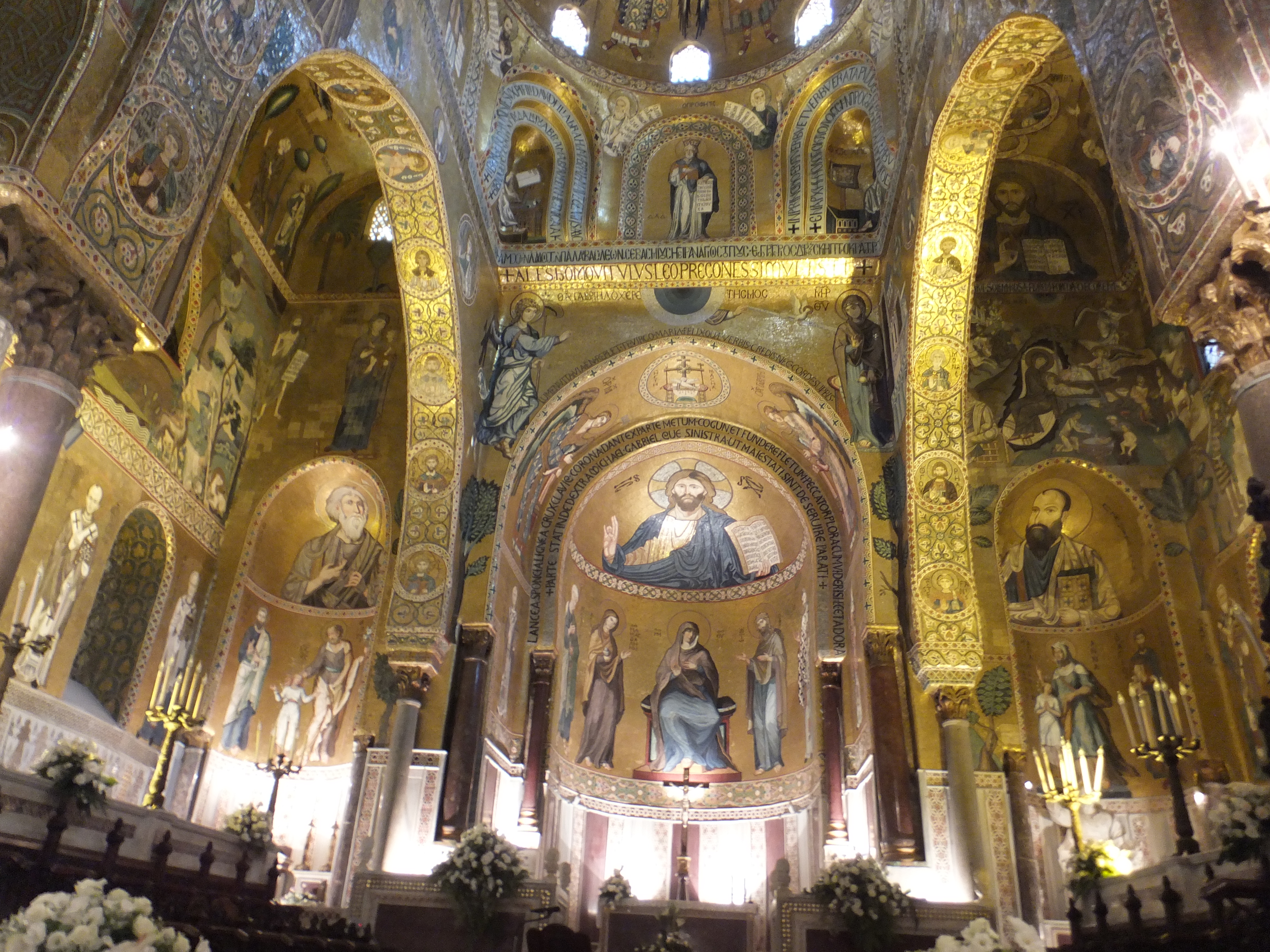 The Normans of the South also participated in the Crusades — Bohemond (an enemy of the Byzantines they were meant to be assisting) established his own independent duchy of Antioch, while his more pious nephew Tancred was the first nobleman to enter Jerusalem and became Prince of Galilee. Duke Robert of Normandy, son of William the Conqueror, also came on Crusade, reminding us that the Crusaders were not all landless younger sons.

The DVD set also came with a doc called ‘Domesday’. I’ve not viewed it yet, but it claims to be awesome. Anyway, this was an excellent documentary series, and I recommend it to you highly.