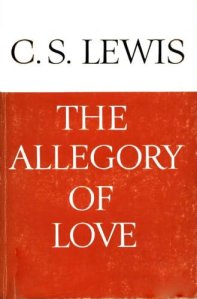 I recently finished reading The Allegory of Love by C S Lewis, his 1936 study in medieval literature, the principal focus of which was, as you may imagine, allegorical love poetry. For research purposes, I was mainly interested in his discussion of the origins and development of allegorical poetry up to the time of the Roman de la Rose, but I found much of interest elsewhere in the book. The parallel discussion of love poetry will have me rereading the Latin elegists next time I teach them.

A friend asked me at the pub the other night whether I believe Lewis is right. My answer was that I think he is, at least in terms of the literature I know. If you do want to read this book, be aware that it would not be published today. Too many of his assertions go uncited or unargued (not that I mind), and too little is cited in the footnotes by way of engaging with other scholars or telling me where that quotation from a modern poem is from. But I don’t think that literary criticism needs to be filled with references to other people. It just needs to be an attentive reading of a text.

This book is worth reading if you are at all interested in some of the major (or, at least, larger) pieces of vernacular medieval literature, mostly English. Lewis’s analyses also include enough detail about the matter of the poems that they can serve as introductions. Just as his A Preface to Paradise Lost made me ready to tackle Milton, so I believe that this book has made me ready for Alan of Lille’s Anticlaudianus (which he didn’t actually like), La Roman de la Rose, Chaucer’s Troilus and Cresside, Gower’s Confessio Amantis, and Spenser’s The Faerie Queene to name the main ones.

It has also piqued my interest in Langland’s Piers Plowman plus a few others.

From my end, the book is simultaneously most contentious and most of interest in the first two chapters. The first chapter traces the history of love poetry to the development of what we term ‘courtly love’, and the second traces the history of allegory. I would have to re-assess Catullus and the Latin elegists to see what I think of Lewis’s argument that they have a very different approach to love and ‘romance’ than we do, but I suspect he is right. We are so used to the love poetry and conventions of our own age that when we read love poetry of a different era, we assume that the poets had the same ideas about love that we do.

His analysis here and in the chapter about allegory is not largely concerned with causes. His argument is mostly to demonstrate that this is true, and to trace the transformation in the poetic mindset that makes Chrétien de Troyes possible.

The second chapter watches the rise of allegory from antiquity to the brief set allegories in Chrétien de Troyes, observing that as the gods begin to recede in Lucan and especially in Statius (especially Thebaid), personifications such as Fortuna or Natura begin to take on more and more character, until we see them break forth in Prudentius and Claudian (and Ausonius!). Lewis does not like Prudentius’ Psychomachia; a pity, for I certainly do.

Lewis then devotes a long, detailed, and interesting chapter to La Roman de la Rose, which is an Old French allegorical poem about a young man seeking to gain access to a garden and the rose that is guarded there. The rose is a young woman’s love, and the garden is her heart (if I recall?), and the various characters represent different aspects of her personality. It was begun by Guillaume de Lorris, who did not finish it, and completed most famously by Jean de Meun, who had a very different conception of how the poem should proceed.

The rest of the book is devoted to the English tradition, closing with a detailed study of Spenser, The Faerie Queene. The thematic trajectory that Lewis traces throughout all of these is the eventual conquest and domestication of courtly love by marriage. Courtly love, in case you have not read about it or read any of its verse, is a high medieval ideal of love between aristocrats that is essentially adulterous, and according to the rules (at least in literature; I do wonder in life…) the cuckolded husband is not to become too jealous.

Courtly love produces the work of Chrétien de Troyes and goodly amount of allegorical verse, as this book demonstrates. Eventually, love allegory shift and transforms in the English tradition, at least, from the pursuit of a married woman to the love of an unmarried man for a maiden, whose natural goal is marriage.

Much has changed in the intervening centuries that have brought us to 23 seasons of The Bachelor — mais plus ça change, plus c’est la même chose.