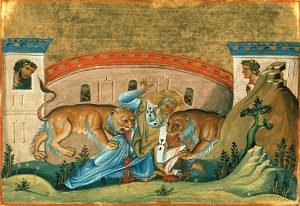 Ignatius of Antioch, from the Menologion of Basil II (c. 1000)

Reading the introduction to Robin Whelan’s Being Christian in Vandal Africa: The Politics of Orthodoxy in the Post-Imperial West, I was reminded of a joke a friend once told.

A man dies and goes to heaven. While he’s there, he meets one of the ancient Christian martyrs (I like to imagine the Apostolic Father Ignatius of Antioch, myself). Ignatius asks our modern fellow what life is like for Christians in the 21st century.

“Well,” he says, “let me tell you. If you say grace before a meal in public, people look at you as though you have three heads. And at work, people made fun of me for being a churchgoer. Christians are the butt of so many jokes! Christians get tirades launched against them whenever they speak about the faith in public. They really throw us to the lions!”

In the introduction to Being Christian in Vandal North Africa, Whelan says that the term “persecution” is problematic. Certainly in the context of the above joke it is. There is a huge difference between being made to feel socially awkward and what the Sri Lankan martyrs suffered on Easter Sunday this year. In a late antique context, there is also a big difference between the Emperor Julian banning Christians from teaching rhetoric and the Emperor Diocletian killing Christians.

However, the reason given for persecution being problematic in the context of the book is that it is used by groups who think of themselves as the exclusive, true, catholic, real Christian church when they meet with sanctions against them by the secular government. I don’t see how this fact has any bearing at all on whether a person is being persecuted.

Now, we can question whether the activities carried out by the Vandal kings were or were not on religious grounds, or whether they targeted religious people, or whether they were as bad as Victor of Vita says in the History of the Vandal Persecutions, or whether there was quite as much as he says, or that it was unremitting as he makes it seem. All well and good. But Whelan acknowledges the legal sanctions against Nicene Christians and those who were sent into exile. Even if the Vandals did not persecute all Nicenes all the time, by any definition of persecution that I know, they seem to have persecuted some of them some of the time.

But this brings me into other, related territory — the contested space of ‘orthodox’ and ‘heretic’ in Late Antiquity, on which, more anon.