The Old Testament/Hebrew Bible has a variety of other genealogies in it. The New Testament continues the venerable tradition. Indeed, in its current order, the first thing you encounter in the New Testament is a genealogy, taking up Matthew 1:1-17:

The book of the generation of Jesus Christ, the son of David, the son of Abraham. 2 Abraham begat Isaac; and Isaac begat Jacob; and Jacob begat Judas and his brethren; 3 And Judas begat Phares and Zara of Thamar; and Phares begat Esrom; and Esrom begat Aram; 4 And Aram begat Aminadab; and Aminadab begat Naasson; and Naasson begat Salmon; 5 And Salmon begat Booz of Rachab; and Booz begat Obed of Ruth; and Obed begat Jesse; 6 And Jesse begat David the king; and David the king begat Solomon of her that had been the wife of Urias…

In what we might call a ‘New Testament’ context, or ‘apostolic’ context (that is, Early Christian), the genealogies of Matthew and Luke serve to tie the narrative of Jesus of Nazareth into the salvation narrative of the Old Testament, seeing Jesus as the Messiah and the culmination of Hebrew salvation history.

When a person who knows the stories of the Hebrew Bible reads Matthew’s genealogy, the stories come to mind — Abraham and the promised son, Isaac. Jacob and Laban, then his sons ‘Judas and his brethren’, including the tale of Thamar. We meet Booz (Boaz in most contemporary versions) and Ruth, Jesse and David, then David and Solomon, with a reference to Bathsheba. The genealogy leads the people of Judah through the exile. It is a reminder of the salvation history of the people of Israel from Abraham to Jesus, Son of Mary.

Jesus is the Christos, the Messiah, the Anointed One. He came to save the people of Judaea/Israel — this mission is even embedded in his name Je-sus, ‘YHWH saves’. For the Christian mind, this is the function of Jesus’ genealogies.

One common ingredient in many of the canon law manuscripts I have spent the past five years studying has been a catalogue of popes, listing each pope in turn, then how many years, months, and days, he sat upon the See of St Peter. Here’s a pope catalogue from one of my favourite canon law manuscripts, Vat. Reg. lat. 1997 (ca 840), called Collectio Teatina: 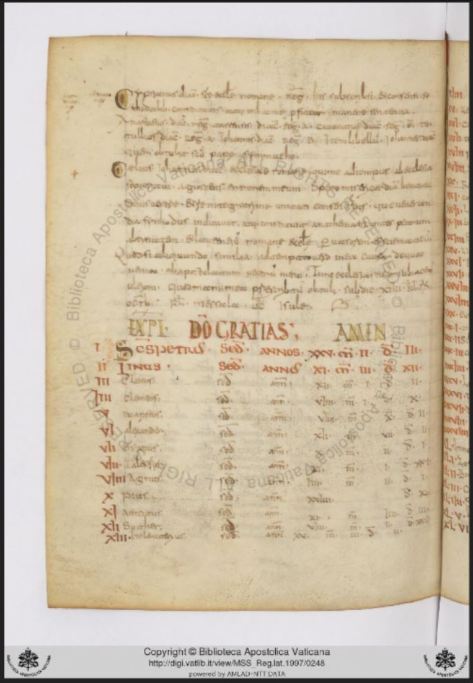 As I discussed on this blog a few months ago, canon law books, especially those arranged chronologically, are not simply reference works (although they are that as well). As Rosamond McKitterick has shown us in History and Memory in the Carolingian World and elsewhere, these canon law manuscripts are also works of history. I must hasten to add that pope catalogues such as those under discussion exist in Late Antique manuscripts, not just Carolingian ones; e.g. Paris, lat. 12097 (6th century), Collectio Corbeiensis:

History for us today is thought of as an attempt at dispassionate reading of the past, an attempt to assess with as little bias as possible the sources of the events and currents and ideas of the world as it has gone before us, and then to make that world accessible to today’s world. History for most of history has been an exercise in a variety of other purposes, classified by the ancients (e.g. Quintilian) as an art alongside rhetoric, rather than a(n attempted) scientific discipline.

For Late Antique and Carolingian Christians, history was even a theological discipline, in one way or another. Those like St Augustine of Hippo in City of God who had more nuance in their thought were careful to argue that ‘bad things happen to bad people’ makes no sense of history, and is even contrary to the Bible: ‘he maketh his sun to rise on the evil and on the good, and sendeth rain on the just and on the unjust.’ (Mt 5:45 KJV) People like Hydatius, on the other, were pretty sure the horrors through which they lived were evidence that the end was nigh, and the Anglo-Saxon Chronicle cites the Norman Conquest of 1066 as God sending the French as a punishment for the sins of the English.

Nonetheless, there are other ways that subtler Late Antique and Early Mediaeval thinkers saw history theologically, and if we are to understand these canon law manuscripts and those periods of history, we must understand how they read and understood the past and what their best representatives believed, not simply lowest-common-denominator Late Antique and Carolingian thought.

Simply put, history is a grand drama, and its climax was in the incarnation of God the Word as Jesus of Nazareth, fully God and fully (hu)man. Everything BC marches up to that point, to the fullness of time, the kairos; everything AD flows from it. Everything BC is the praeparatio evangelica (to borrow the title of a book by Eusebius of Caesarea, fourth-century Christian historian), the preparation for the Gospel — this includes the Jewish nation, the Greek philosophers, the Roman Empire, the pax Augusta.

The Hebrew Bible’s geneaologies fit perfectly well within this Late Antique and Early Mediaeval praeparatio evangelica. The history of the Church, flowing from Pentecost to the day of the writers, is the continuation of the drama that had climaxed at Golgotha and the empty tomb.

The pope catalogue, I believe, takes the place of the genealogy in history as interpreted in the New Covenant of Christianity. In the world of ancient Israel, the Covenant was forged in blood — the bloodline of Abraham, Isaac, and Jacob, whose descendants worshipped YHWH at Tabernacle and Temple. Kinship is important, and YHWH made his ways known to people within the kin-group of the nation of Israel.

Christianity forged a New Covenant in the blood of Jesus of Nazareth (cf. Mt. 26:28), sacrificed on a Cross outside the walls of Jerusalem. It was participation in this blood that made a third race, as second-century Christians were already viewing themselves — not Jews, not Greeks/Romans/barbarians (that is, Gentiles), but something new in the world. This was a spiritual kin-group of brothers and sisters who were members of a royal priesthood with God as their Father. As Jesus had said, God could make sons of Abraham out of the stones if he desired (Mt. 3:9).

There is no place for physical, biological lineage in this new nation of the New Covenant and the new promise, forged in the drama of God’s incarnation as the Nazarene. The new lineage of the new family of God is spiritual.

The churches of Late Antiquity and the Early Middle Ages saw themselves as the visible representation of this great spiritual family of God. The heads of their households in the cities were bishops, and they acknowledged each other as legitimate in an international network of communities of the faithful. Bishops routinely address each other, ‘Most esteemed brother.’ They referred to presbyters, deacons, and the laity as ‘sons’, and were often referred to as ‘Father’ (pater or papa). This included a recognition of the historic, major apostolic centres of Christianity — Antioch, Alexandria, Rome, with Jerusalem added at Nicaea in 325.

These apostolic centres served as organisational structures for discipline and unity; their bishops, eventually called ‘Patriarchs’, were meant to look out for and after their own regional familial communities. In the West, Rome is held with greatest esteem, even if there were disagreements about how Roman auctoritas might play out in real life (see various fifth-century letters between Leo the Great and bishops of the Province of Viennensis).

Because the compilers of these canon law collections saw themselves and their local bishops as part of the ongoing promise of God to the human race, as part of the inheritance of the covenant forged in Jesus the Christ’s blood and recapitulated each Sunday in the Eucharist/Mass, a catalogue of popes was not merely a handy list of who’s who. A catalogue of popes was a visible representation of the cosmic history of the church from Christ’s apostles to the compiler of the canon law book, from Peter to Linus to Clitus to Clement, on to Damasus, Siricius, Anastasius I, Innocent I, Zosimus, through Leo I, Hilarus, Simplicius and then Gregory I and so forth. These men and their letters, their sermons, their tractates, their liturgies, the stories of the lives, were a living bond between the Christian in, say, Gaul and the Apostles in Jerusalem, Antioch, and Rome centuries before.

The Christian Church for the compilers of canon law books was not merely an institution with regulations as visible in the books. It was a living community of brothers and sisters in the faith, with a spiritual lineage stretching back to the salvation of the world in Jesus Christ. A catalogue of popes is a visual representation of this apostolic bond, and a genealogy of Jesus Christ is a similar visual representation of the covenant between YHWH and his people for the 2000 years from Abraham to Jesus, born of Mary in Bethlehem of Judaea.

A pope catalogue, then, is a spiritual genealogy of the theological history of the world.