I have a cold, so I stayed in today to recuperate. And because a friend on Facebook has made some recent Conan the Barbarian soundtrack posts recently, I was in the mood for the Cimmerian’s days of High Adventure. While you read this post, enjoy Basil Poledouris’ soundtrack:

That soundtrack, in fact, is the best place to begin. Conan the Barbarian would not be the film it is with Poledouris’ soundtrack. Although I haven’t seen Conan the Destroyer since I was a kid, I have no doubt that it’s the best part of the sequel. This soundtrack is the other protagonist, some say. I believe it. Soundtracks provide the mood of a film, and the mood of this film is that of high adventure, of epic, of a grand stage on which daring deeds are performed. It’s like how either ‘the mood’ or ‘Gormenghast Castle’ are the actual main character of Titus Groan and Gormenghast, not the hypostatic characters.

At the beginning, as Conan’s father teachers him of Crom and discusses The Riddle of Steel, there is a feeling that here, in these early roots of fantasy (Robert E Howard, Conan’s creator, died in 1936), Northernism was already present.

That’s not the case. Sword and Sorcery — the subgenre to which Conan belongs — is not as Northern as Tolkien or The Worm Ouroboros by far. Howard set Conan and Kull in the Hyborian Age, between the Ice Age and the beginning of recorded history; later adaptors/continuators such as Roy Thomas in the comics and L. Sprague de Camp in print (amongst whose writing credits is the novelisation of Conan the Barbarian, one of the two Conan books I’ve read) set it ca 10,000 BC.

Whenever the Hyborian Age was, it is a time long past. It is by no means mediaeval, and, although Howard’s Cimmeria whence Conan hails is Northern, this film takes place farther south.

Indeed, the sets of Conan the Barbarian‘s cities feel like early cities, not dissimilar to Mesopotamia. Certainly the topography is not northern. We have here a land reminiscent of the Eurasian Steppe at times, at Central Asia at others (which I’m pretty sure is what they’re going for). It is refreshing, in a genre overrun by medievalism and northernism, to find a world that is consciously pre-historical yet urban, purposefully mythical and technologically primitive.

I’m sure other people could point out more, but there are a few Classical echoes in Conan the Barbarian — Conan’s homeland of Cimmeria is one of the lands in The Odyssey, Conan fights as a gladiator, reference is made to Titans, and Conan is crucified on the Tree of Woe. In the Bacchanalian scene at Thulsa Doom’s lair, there is even a tamed ‘panther’, drawing us into the world of Dionysius and his revels.

Furthermore, to show us how transgressive Thulsa Doom’s people are in relation to the wider world and how they undermine civilisation, they are anthropophagists (cannibals) — the eating of human flesh was a strong symbol of savagery and the undoing of civilised life in Greek literature; Polyneices was accused of metaphorically eating the flesh of his fellow citizens in Antigone, for example. Also, this was a bad idea: 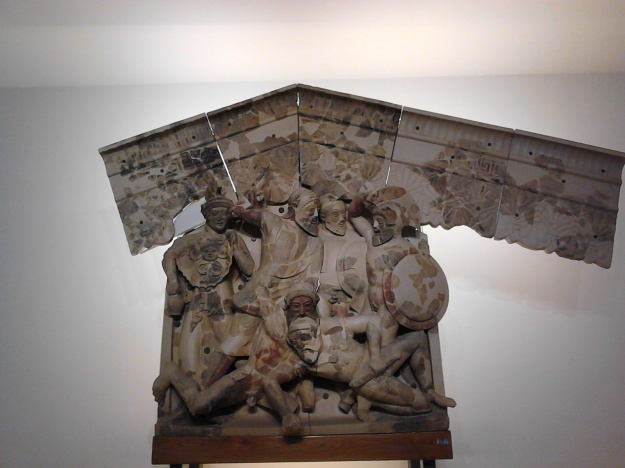 Tydeus eats Melanippus’ brain in the campaing of the Seven Against Thebes on the pediment of an Etruscan temple, now in the Villa Giulia, Rome

Tydeus never really lived down eating Melanippus’ brain. The gods above are quite shocked.

Here is an undoubtedly subconscious Classical resonance, but one nonetheless.

Another ancient resonance is Conan’s famous quotation that the best thing in life is:

Crush your enemies, see them driven before you, and hear the lamentation of their women.

One of the most ancient codes out there is simply: Help your friends; harm your foes. Its traces are found in Homer and a lot of archaic period Greek poetry. It is the code of Gilgamesh. It is the code of Niall’s Saga. Indeed, it underlies much feud practice, from Troy to gangland and drive-by shootings.

I don’t have very many other thoughts, except that I’m going to read some Robert E Howard soon. I’ve read a number of the Roy Thomas comics and black-and-white magazines, and I saw the original two films plus Kull, and I’ve read Kull. But it’s been a while since I’ve indulged in this, and I’ve actually read very little of Howard’s Conan output. Who knows what classical resonances I’ll find? Certainly, even if some scorn pulp and the sword and sorcery subgenre, these stories are amongst the foundations of modern fantasy.