The Victory (or Nike) of Samothrace, Louvre (my pic)

I am, by trade, a Classicist; thus, I blog on the subject often, on everything from Homer to the period called ‘Late Antiquity.’ So here’s a page dedicated to this ever-recurring topic on the blog. You can find the multitudinous posts in the Classics category here.

However, to study even those temporally- and philologically-defined subjects requires a vast range of other knowledge, and today Classics is used to denote the study of the entire ancient Mediterranean world of the Greeks and Romans: history, literature, art, archaeology, philosophy, religion, linguistics, and so on and so forth. Temporally, today Classics stretches from the (basically) pre-historic Bronze Age ca. 2000 BC to the overlap of ancient and mediaeval in the years AD 500-700.

Classics is a fascinating subject and, although you wouldn’t guess it, it is ever-changing and shifting. New texts and new objects are always coming to light, new connections between the various literary and material remains of the ancient world are being drawn, and new methodologies are being brought to bear upon the ancient world. But, even without the new, the old is itself intrinsically interesting.

Why, you may wonder, would a young man in the prime of life choose to study these texts and cultures? Why should you even care?

Well, as I have argued in my post ‘You Should Read the Iliad‘, these cultures are the foundations for western culture — our culture (most likely, unless an Asian, African, Oceanian, or First Nations person has stumbled onto my blog). Read The Great Gatsby. Without a knowledge of Petronius, the line about Gatsby as Trimalchio is meaningless. (Now read my post on the subject.) 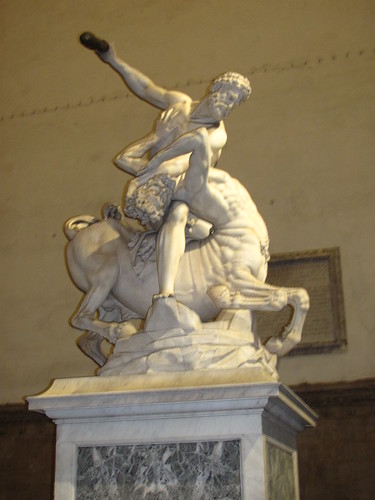 Also in front of Palazzo Vecchio: Heracles takes down a centaur

Go to Florence. Without Classics, one’s appreciation of the Roman Art in the Uffizi, or of Botticcelli’s Birth of Venus, or of Perseus and The Rape of the Sabine Women in front of the Palazzo Vecchio, is severely diminished. How can we read Dante without Virgil?

Beyond the foundational nature of the Graeco-Roman world, Classics is just plain interesting. Ancient philosophy makes you rethink what you believe and why. Ancient poetry stirs up the emotions. Ancient history helps you see the shaping of the world. Ancient art lifts your heart and mind to heights of glory.

Besides the aforementioned Classics category, here are some posts on this blog that focus on the Classical world:

What makes a classic?

Classics for the Non-Classicist: 10 Books to Start

Classics for the Non-Classicist: 10 Greeks

You Should Read the Iliad

My translation of a fragmentary poem about Orpheus by Phanocles

Latin Is All Around Us