In my series (original post here) on my quest for Late Antique Rome, which has made halting progress, I have already tickled your ears (or eyes, I suppose) with the Mausoleo di Santa Costanza and a few basilicas. One of the largest Late Antique edifices in the city of Rome is the Baths of Diocletian:

Baths of Diocletian, from Best of Rome, Italy by Wikimedia user Joris

In my other halting series, ‘Discover Late Antiquity’, I recommended that one first discover Rome before discovering Late Antiquity — that everything in the late and post-Classical world has roots and references in the history and culture of the Roman Empire. Baths are a key element of that tradition. Nothing is more (stereotypically) Roman than baths. As the famous graffito writes:

Although they came to Rome from the Greek world, baths went through their own transformation on Italian soil, and went from hot rooms with individual tubs to communal bathing full of lots of naked dudes all wet together. The basic Roman bath had a changing-room (apodyterium), a frigidarium (cold pool), a tepidarium (lukewarm pool), and a caldarium (hot pool), this last in a room also with a water basin on a stand. After 100 BC, hypocausts were invented, and things could really heat up in the baths. A hypocaust is basically central heating, running beneath the floor and even through the walls. Here are some photos my wife and I got of hypocausts at baths in Ostia Antica, Rome’s port: 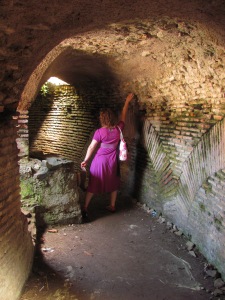 Inside the hypocausts of Ostia Antica 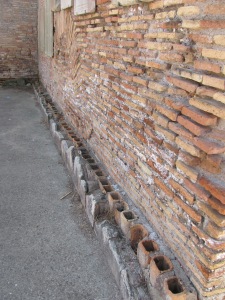 Baths with the basic design can be found throughout the Roman world — as far afield as Jerash, in modern Jordan (where I’ve not been), and Bearsden, a suburb of Glasgow (we have some in Edinburgh at Cramond, but I’ve not yet found them, despite two trips out there):

My photo, complete with archaeologists!

Anyway, big baths, such as those at Ostia Antica or the Baths of Diocletian under discussion, typically come equipped with saunas, and exercise grounds. The really big ones in Rome, not just those of Diocletian but also of Caracalla and Trajan, if not others of which I know less, also had big, public, ‘basilical’ halls, gardens, lecture-halls, libraries, and more. They evolved into large spaces for public and civic activity in Rome and the other cities of the Empire.

Evidence that ‘Late Antiquity’ is still ‘Antiquity’, still Roman, is the building of the Baths of Diocletian ca. 306 as well as the maintenance of the other city baths into the fifth century — indeed, they are mentioned as being mended as late as Theoderic the Great (Ostrogothic King of Italy, d. 526).

A good angle of the Baths of Diocletian

Anyway, after visiting some basilicas and the Museo Nazionale Romano in Palazzo Massimo, I visited one of its sister sites, housed today in the Baths of Diocletian (Terme di Diocleziano). Built, as I said, around 306, these are the largest bath complex ever built in Rome. When you walk around the neighbourhood, you can sometimes see a ruinous brick structure amongst the modern — bits and pieces of Diocletian’s legacy. This was more than a series of pools as found in Roman camps such as Bearsden. It covered over 13 hectares, over 32 acres. Small for an Albertan farm, perhaps, but gigantic for a bath complex. Here’s one of my shots to give you an idea of scale: 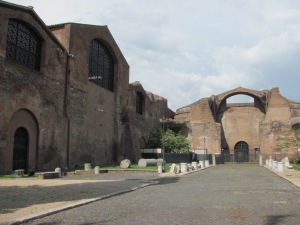 Besides their ground coverage, the Baths of Diocletian also have some good height: 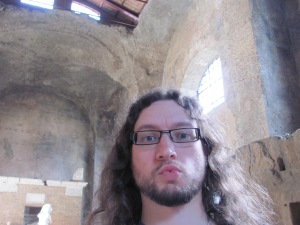 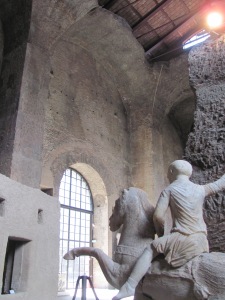 The exhibits are worth seeing — a variety of Roman statues, sarcophagi, tombstones, etc., arranged throughout the bath complex as well as in the Carthusian cloister built by Michelangelo. There is also a very excellent gallery of Roman inscriptions, where I got to see these (amongst others):

Fragment of the ‘Forma Urbis Romae’, a stone map of the city. Here you can see a bit of the Forum, the Temple of Castor and Pollux

After the museum, I recommend going into the bit of the Baths of Diocletian that has been transformed in the church of Santa Maria degli Angeli. Here, I think, you will get a better sense of the ancient grandeur of the place, with its marble floors and stone-lined walls and elegant grace and beauty. If you take out the Christian altars, it is probably much as the baths were in Diocletian’s day. 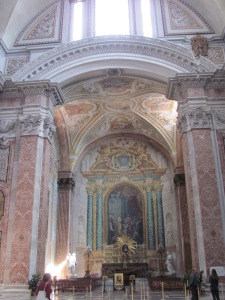 I enjoyed my visit to the Baths of Diocletian, and I think they are a unique witness to the monumental architecture of imperial Rome. In my next post of this series, whenever I get around to it, I’ll look at the little things of Late Antiquity that I found in Rome’s museums.