So the main things I blog about here are pretty much ancient stuff (including Late Antiquity), mediaeval stuff, and SF stuff. And as a lover of Late Antiquity, hunting for Late Antique remains in Rome was an important aspect of my time there. This mostly took the form of churches, such as the lower church at San Clemente, or the old nave (now chancel) of San Lorenzo fuori le Mura, or the fabric (but not decoration!) of San Pietro in Vincoli, or the fabric and certain mosaics of Santa Maria Maggiore and Santa Sabina.

And looking at those Late Antique churches, your mind tends to run on ahead to the Romanesque, to the mediaeval, rather than back to the Classical, to the ancient. It doesn’t help that sixth-century San Teodoro, for example, has its original apsidal mosaic but is otherwise decked out with Baroque/Renaissance paintings with a modern Greek Orthodox iconostasis. 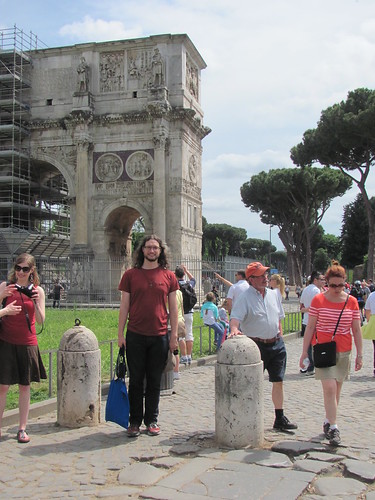 Erected in AD 315 by Constantine, the Arch of Constantine is the biggest triumphal arch in the city, celebrating Constantine’s victory over Maxentius at the Battle of the Milvian Bridge in AD 312. It is the only monument of this sort erected to celebrate victory in battle against Roman citizens in civil war. Constantine, in many ways, is doing something new.

He’s also spoliating various old things, of course, including those nice, round Hadrianic tondi from one of that emperor’s villas.

Also, the Arch of Constantine is right between the Colosseum and the Palatine/Forum (depending on your destination from the Colosseum). So it’s in the middle of the action when you visit ancient stuff in Rome.

It’s only a few decades earlier than Santa Costanza (blogged about here). So that Romanesque world is not so far away when you view something as Roman as that triumphal arch. Worlds are melding and morphing in Late Antiquity. 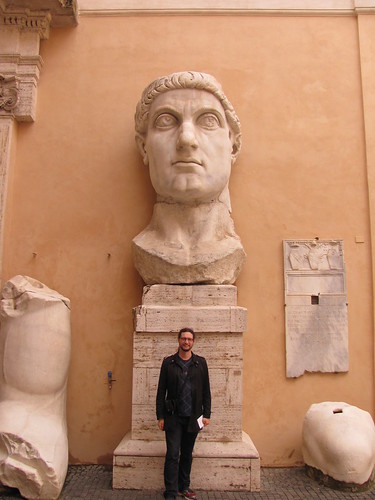 Here I am with Constantine’s big, giant head from around the same time as the Arch

Anyway, as you can guess from the photos above, I was stoked to visit the Arch of Constantine and also his big, giant head. I mean, Constantine’s a big name in Roman history. And I got to see an intact monument he erected, celebrating an event I studied at university. Totally awesome.

Such Constantinian monuments cause me to look back (although they have their distinctive, fourth-century flavour) — back to the marble statues in the museums, to the Arches of Titus and Septimius Severus, to the Columns of Trajan and Marcus Aurelius. To the Flavian Amphitheatre (Colosseum).

These pieces of art, these monuments, speak to us across the centuries and record moments and attitudes of the dead. They are the speakers for the dead. And I find these Romans communicating to me over these centuries, these millennia, fascinating. 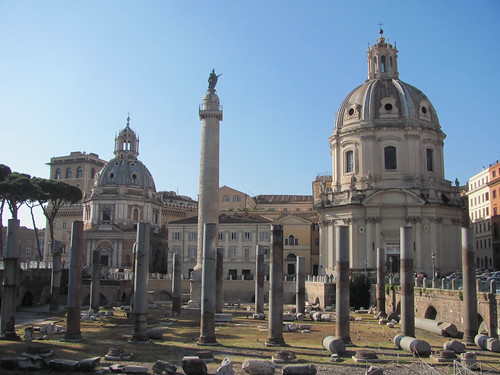 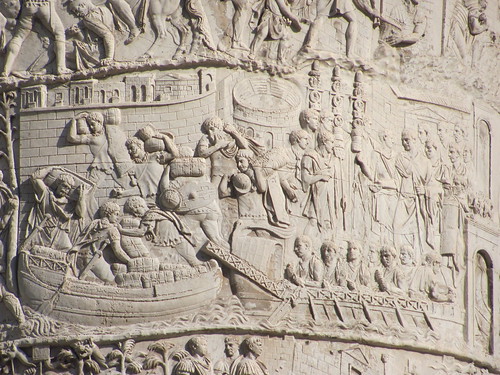 My second-last day in Rome I took my binoculars with me to the Forum area (as you do). And I looked at the entire north side of the Column with them. Such vitality in the images! Such realism! Such beauty! Such classical grace! And look — a guy falling off a donkey!

So suddenly, here we are, celebrating Trajan’s campaigns against the Dacians of AD 101-01, 105-06 in front of a column from 113 — in 2014. And it speaks to us, not just as a piece of monumental, triumphal architecture, but as art expressing the human realities of the Romans and their time.

At the Arch of Titus, you see the Menorah in sharp relief, causing you to think of the Jewish War of AD 70 and the destruction of Jerusalem: 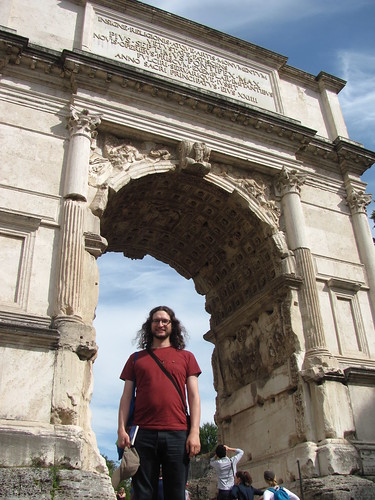 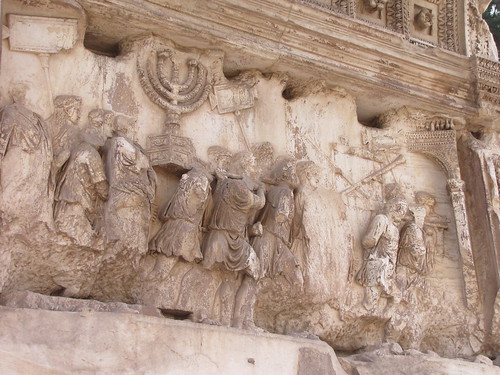 The Colosseum, of course, is all about the blood. 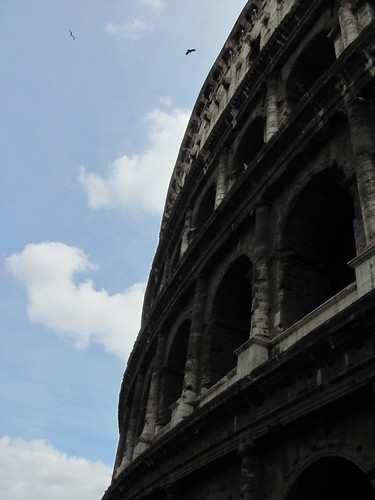 But it’s not just the monuments. The statues in the museums — of which my Flickr photostream is full to bursting — also speak to us about Romans and history and their world. This jaunty centaur from Hadrian’s Villa at Tivoli, now in the Capitoline, speaks volumes, I’d say: 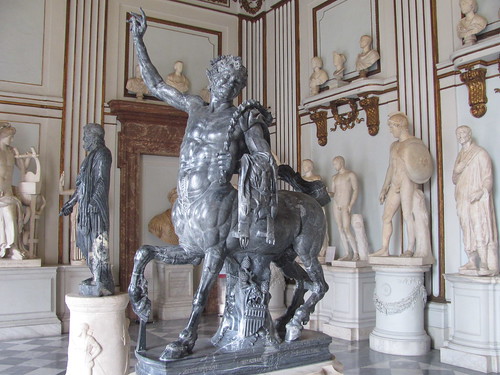 Or the houses at Ostia Antica showing in their layout the ordinary lives of ordinary Romans. At this thermopolium you could pick up some Roman fast food: 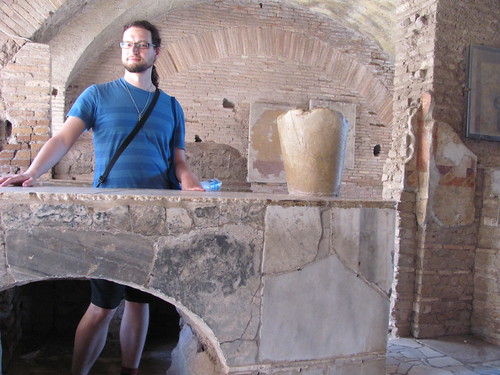 I could go on. While I may often wax technical about the transformation of antiquity into the mediaeval world, or post lengthy pontifications about medieval epic, I am still enamoured with Roman history, and my trip to the Eternal City only helped to strengthen that love.