The Mausoleo di Santa Costanza was the first stop on my hunt for Late Antique Rome four weeks ago (although I’d seen the Baths of Diocletian [298-305] several times from the bus window already!), given that it’s only a ten minute walk from where I’m staying. I tried going after work on a Friday night, but got there at 6:09 — nine minutes after closing! Alas. I peeked around at the seventh-century (and beyond) Basilica di Sant’Agnese at the bottom of the hill and returned the next morning to see Santa Costanza at the start of a long day of churches and museums! 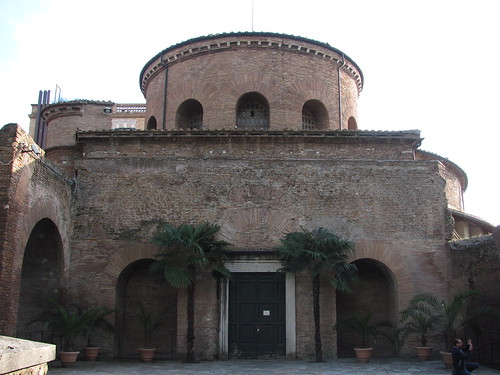 As you can see, the mausoleum, like similar, larger ones elsewhere in Rome (Castel Sant’Angelo [Hadrian’s] & Augustus’ spring to mind) is basically a large, brick cylinder on the outside. I understand that it was initially faced in coloured stone.

This mausoleum was built for the daughters of the Emperor Constantine in the fourth century. The real showcase is not the exterior, I can assure you, although it does look a lot like the mausoleum built by Maxentius for his son in 307 (in the Forum, originally mistakenly identified as the ‘Temple of Romulus’): 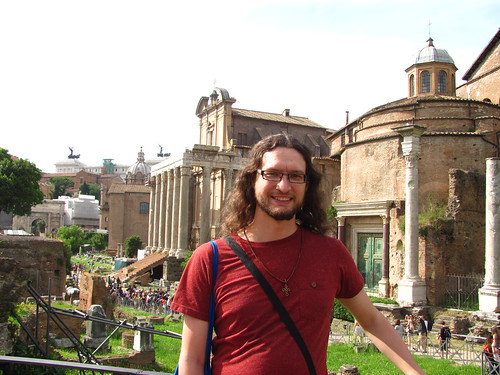 The mausoleum of Maxentius’ son is on the right, over my left shoulder.

The real show case is the lightness of the interior, now a church (although Constantina was not a saint), with its circle of pillars supporting arches and a dome; the fresco is not original, although I think I read somewhere that the theme of it is. 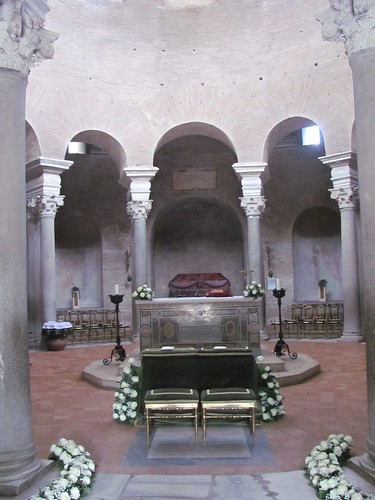 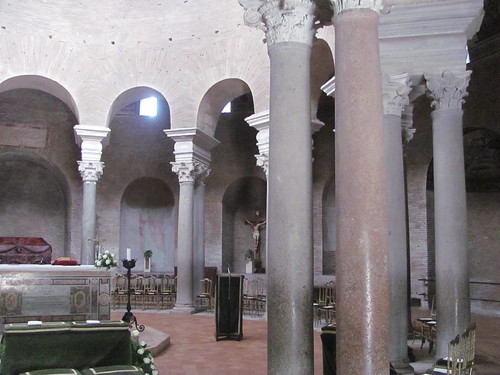 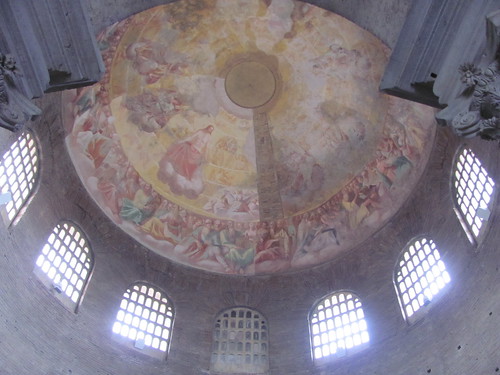 In the background of the first of these three photos, you can see a reproduction of Constantina’s porphyry sarcophagus, the original of which is now in the Vatican Museums. When they moved it, the cart required four oxen to pull it! Porphyry is a very heavy, very dense stone.

Not my photo (but I have seen it in person!)

Architecturally, Santa Costanza reminds me of the Late Antique roots of Romanesque architecture. Italian Romanesque is never as heavy as it is somewhere like Durham Cathedral or Dunfermline Abbey, and I’ve read that some people refuse the name to Italian architecture of the Middle Ages. Be that as it may, Italian mediaeval architecture such as that visible in San Clemente or San Lorenzo Fuori le Mura or the churches of Verona is visibly and tangibly linked to this Late Antique style; tradition runs strong in Italian art and architecture. 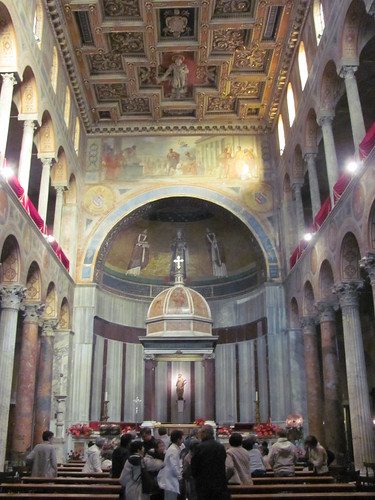 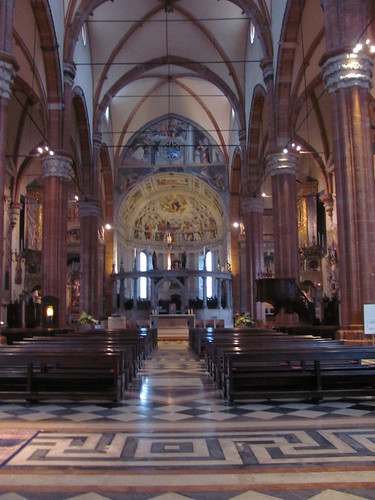 For me though, the real star of Santa Costanza is the interior decoration. The ambulatory — that is, the space between the pillars and the outer wall — still has a good supply of the original mosaics. And I love mosaics, especially Late Antique and Early Mediaeval ones.

The ceiling of the ambulatory contains these very lovely designs, and the image of the people partying (?) in the last one is my favourite. 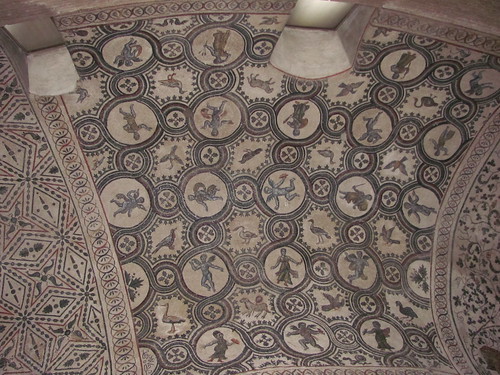 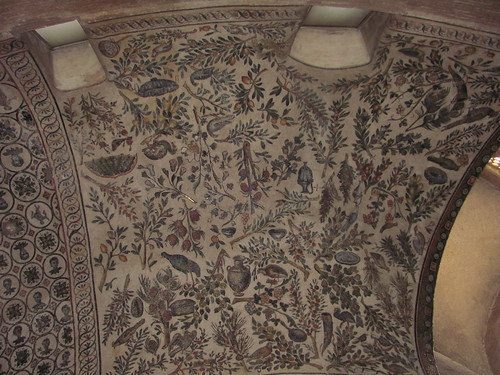 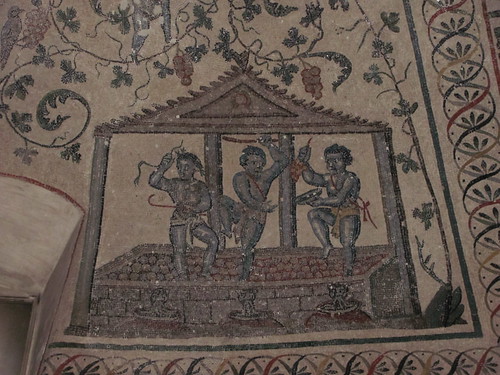 The star of the show, however, is Jesus. First, here is a beardless Christ from the eastern niche of the ambulatory: 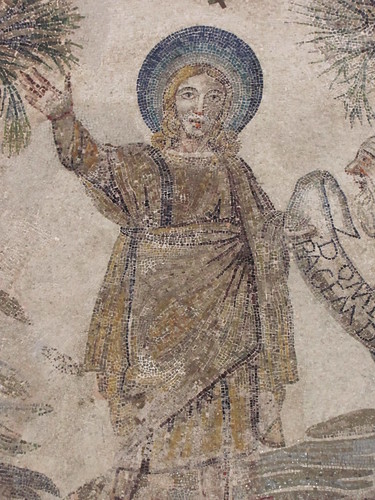 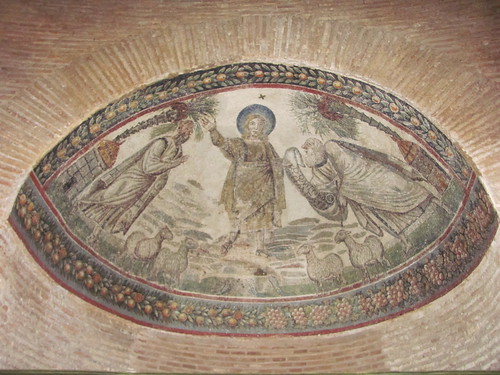 And a bearded Christ in the western niche: 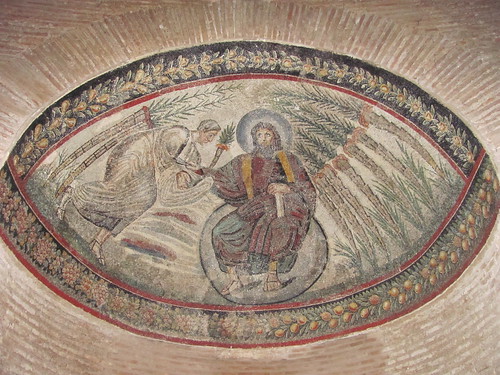 I like that the people, including Jesus, are all dressed as Romans in these images. And bearded Jesus even has on a purple toga, which is fitting for the King of Kings. The others, too, have togas. Sometimes people criticise these old, encultured images of Jesus and the Apostles; sometimes those same people get excited about new, encultured images. These images are portals into the mindsets of fourth-century Romans. They are also portals into upper-class fashion of fourth-century Rome!

In a Late Antique mosaic, every stands out sharply. There is enough naturalism that these people do not look like children’s drawings, but there is a growing preference for showing things head-on. This is especially the case for Christ, who is the main attraction, after all. This is part of a wider movement of making a beautiful whole that is made up of smaller, brilliant pieces, each interesting in its own right — a stylistic departure from ‘classical’ modes of balance and proportion.

Finally, beardless Jesus is not surprising, since the Good Shepherd in the catacombs is himself beardless! I am not sure what the interpretation of him beardless is, though. Nonetheless, already in the 300s he has a halo.

Romanesque and Byzantine art are only a short step away…