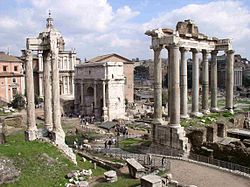 Yesterday I read R W Burgess’ edition of the fifth-century Consularia Constantinopolitana (which he notes is a misnomer; it’s a Descriptio Consulum that is primarily — not entirely — western in origin). This is a document that is mostly a list of every consular pair from the first consuls of Rome in 509 BC up to the year AD 465 when the final redactor/editor of the document presumably ran out of source material.

Along the way and with increasing frequency after Constantine, other events are inserted — but not nearly so many as, say, in a Chronicle, and not with nearly so much detail. These are sort of the markers as we use them in real life. We may not necessarily remember what we did in 2003 or in the third year of Jean Chrétien’s time as Prime Minister, but we remember ‘The year Hale-Bop appeared,’ or, ‘The year my brother’s dog died.’ (Those events do not line up with the dates above.)

Anyway, it’s a fun document and pretty quick if all you’re doing is reading it (and seeing that Majorian’s consulship fell in AD 458).

What struck as I was looking at the first full, two-page spread of the consular list was how many consuls there were. Now, the enormity of Rome is exaggerated by the fact that consular terms are only a year in length, so every year theoretically gets an entry, and some years get more than just their consuls. But, still. It’s a lot of history.

Add 11 more, and you go up to the deposition of the last western emperor in 476. 985 from the foundation of the Republic to the establishment of the first ‘barbarian’ kingdom in Italy.

Pyramid of Zoser at Saqqara, from 2600s BC, almost 2000 years before Rome was founded

I guess it’s not as long as the 2000 years of Egyptian history from the First Dynasty to the start of the Third Intermediate Period (3100-1100 BC; I stop us there since said Intermediate Period lasted a few hundred years and the next dynasty wasn’t Egyptian but Nubian — cool timeline here). But it’s a very long span of time.

Indeed, it’s almost as long as our next major human-constructed historical era, the Middle Ages. In that period, Rome goes from a major power in central Italy to the major power of Italy, the major power of the western Mediterranean, the only power in the Mediterranean, and then stretching beyond until oceans, Germany, Persia, and the Sahara get in the way (gross oversimplification) — and then back to one major (or should we say MAIOR?) city in central Italy.

The triumph of Roman Imperium is, in fact, how long she was stable. The Roman Empire is one of the few expansionist empires that made the ‘happy’ transition from expansion to stabilisation.

Anyway, in this 985-year period what do we get? We get (as things come to mind) the Roman Forum, the Colosseum, Virgil, Horace, Livy, Ammianus, Claudian, Sidonius, Leo, the mosaics in the side chapel at Sant’Ambrogio in Milan, Augustine, Hadrian’s Wall, Plautus, Terence, and more, more, more. Some of the greatest works of western literature, some of the West’s most brilliant minds, some of her greatest statesmen and generals, some of her greatest art come from the 985-year rule of Rome.

Rome was big and around for a long time. So when you look at your puny, young nation-state, do not expect life to always go on as normal.

Note: It seems the Roman Senate was still active in the city’s affairs at least until 603. This gives the Senate a lifespan of well over 1112 years.